Anatomy of the Knee 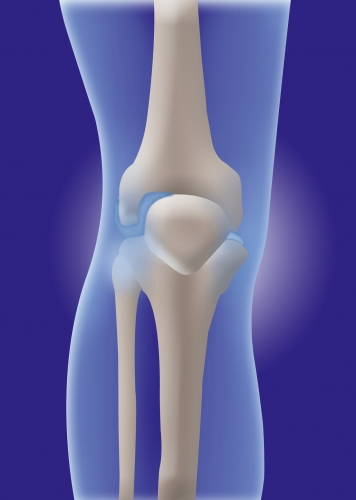 The end of each of these bones comprises of a layer of smooth, elastic tissue known as articular cartilage. The cartilage shields the bones for smooth transitioning and acts as a shock absorber.

Atop the tibia are two crescent-shaped pieces of cartilage called menisci. The knee joint is joined to the calf muscles, as well as the quadriceps and hamstrings. It is these muscles working in unison that provide a 180 degree extension of the knee.

Optimal knee function is essential for the basic movements required in activities including standing, walking, kneeling, running, jumping, skating, etc.  Each of these movements is achieved through the flexion of extension of the knee joint.

Getting to Know Your Knee

Tibia—shin bone or larger bone of the lower leg.

Cartilage—tissue that covers the surface of a bone at a joint.

Ligament—tough, elastic connective tissue that surrounds the joint to give support and limits the joint movement.

Meniscus—curved region of the cartilage in the knee and other joints that acts a shock absorber.

Get a FREE quote for Knee Replacement

Once you click the button you will receive your quote in your email within a few minutes and we will never spam you.